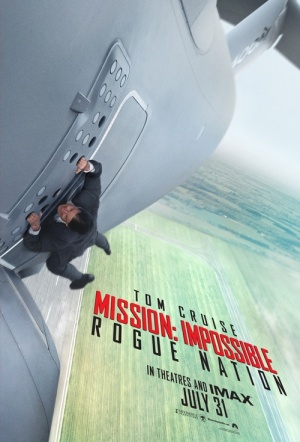 The Tom Cruise action-spy franchise continues, this time with Christopher McQuarrie (Jack Reacher) in the director's chair. Ethan and the crew must stop The Syndicate – an international rogue organisation of equal skill and measure dedicated to wiping out the Impossible Mission Force. Co-stars M:I regulars Simon Pegg, Jeremy Renner and Ving Rhames as well as new stars Rebecca Ferguson (Hercules) as an elusive ally and Sean Harris (Prometheus) as the villain.

Mission: Impossible - Rogue Nation is the film that leaves you wanting more. Not five minutes more. Five films more. More so than any of its predecessors this instalment establishes Ethan Hunt as James Bond 2.0 (US Spelling edition).

This is the rare sequel that leaves its franchise feeling not exhausted but surprisingly resurgent at 19 years and counting.

Might have its hi-tech gadgets, but it's a pleasingly old-fashioned affair.

Rogue Nation is an uneven film.

A sequel that is slick with silliness, but peppered with enough wit and peril to sustain the franchise’s momentum.

A two-hour blast of good, honest, stupid fun. And that, I reckon, is just as it should be.

The series still flies, as does Tom Cruise.