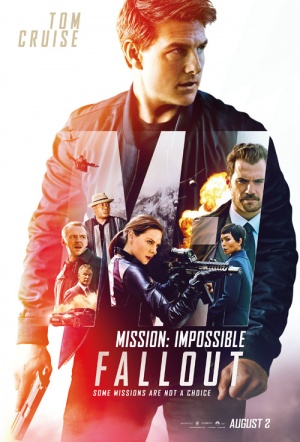 Writer-director Christopher McQuarrie (Mission: Impossible - Rogue Nation) and Tom Cruise are back for the sixth entry in the series, which finds Ethan Hunt (Cruise) and his IMF team (Alec Baldwin, Simon Pegg, Ving Rhames) along with some familiar allies (Rebecca Ferguson, Michelle Monaghan) in a race against time after a mission gone wrong.

Ethan Hunt and the IMF team join forces with CIA assassin August Walker (Cavill) to prevent a disaster of epic proportions. A group of terrorists known as the Apostles plan to use three plutonium cores for a simultaneous nuclear attack on the Vatican, Jerusalem and Mecca. When the weapons go missing, Ethan and his crew find themselves in a desperate hurry to prevent them from falling into the wrong hands.

Here, with everything that he's ever cared about on the line, Hunt proves why he's summer's most valuable action hero.

McQuarrie's film is the most fun you're likely to have at the movies this season, a riot mounted with precision, a melee in which every punch and crunch is considered.

OK, McQuarrie may not have De Palma's sweat-drop precision, John Woo's craziness or the impish wit of Brad Bird, but his mastery of logistics here is easily sufficient to make it the blockbuster of the summer.

The movie is propelled by action scenes that transmit a little something about the characters while nudging the story forward, much like the song-and-dance numbers in a musical.

Crashes and petrolhead spills are what this franchise is reasonably expected to deliver. And this is what it cheerfully does.

The action here represents the mainstream cinema's version of extreme sports and these guys have staked their claim at the summit.

...dazzles with its intense drama and gorgeous, grand scale cinematography...