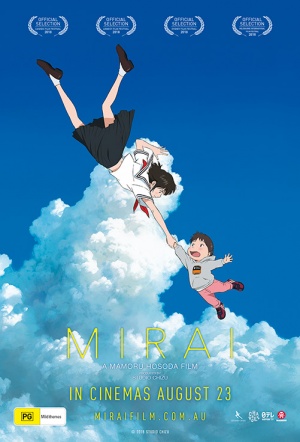 A young boy who is jealous of his new little sister experiences a time-hopping adventure in this Japanese animation from the director of Summer Wars.

"Four-year-old Kun is disappointed when the new baby in his family promptly replaces him as the centre of attention; he refuses to accept his little sister, Mirai. When a magical and mysterious gateway opens in the garden, Kun has the chance to encounter his family members when they were young themselves. He is also visited by an older girl with the same name as his sister, leading to a series of surprising adventures, which change how he sees the world." (Sydney Film Festival)

In Mirai, a toddler inexplicably travels through time and space as a means to understand the importance of family. It's a cool premise for an all-ages animated film that feels on-brand with writer-director Mamoru Hosoda, who previously brought us Summer Wars and The Girl Who Leapt Through Time. Mirai's titular character also leaps backwards through time to confront her brother Kun, paving the way for a worthwhile fantasy journey.

It's the work of a true auteur (in what feels like his most personal film yet) presented as innocuous family entertainment.

Mirai can be recommended to both adults and children...Those aged around eight and up may be amused to recognise aspects of their younger selves.

Even better, it's a rare animated flick you can have family discussions about afterwards, rather just reminisce together about the best gags.

The film balances spiralling flights of fancy with glinting observations on parenting and family dynamics.

A sweet child's-eye view of the world.

Casual fans of anime would do better aiming a little higher...