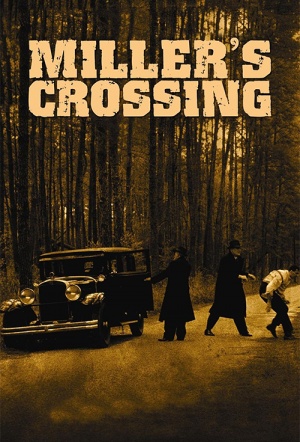 Tom Regan (Gabriel Byrne) tries to keep the peace between warring mobs but gets caught in divided loyalties in this Coen brothers neo-noir gangster film.

Substance is here in spades, along with the twisted, brilliantly controlled style on which filmmakers Joel and Ethan Coen made a name.

It's arguably the US mainstream's first art movie since Days of Heaven; and quite wonderful.

Without much point at all.

There is a lot here to admire.

Yet anything this stylish should have something to say, and "Miller's Crossing" is a declaration of serious but not altogether fathomable intentions. And unfortunately for a movie about friendship and loyalty, its diversions aren't enough to melt its cold, cold heart.

With suddenly dark moments and trademark inflections in the script, it remains typically Coen unorthodox - another intriguing contradiction.