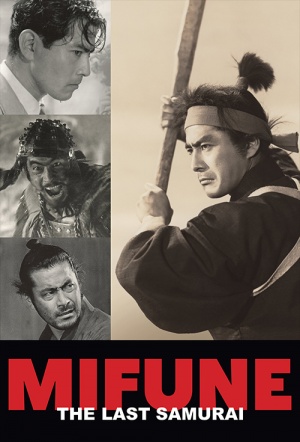 "After falling into acting by accident, Mifune came to the attention of Kurosawa in the late 1940s, just as the filmmaker was finding his stride. "Mifune became Kurosawa's wild artistic id," Variety's Owen Gleiberman said of Kurosawa's trusted collaborator, "as surely as Robert De Niro was Martin Scorsese's in the '70s." Scruffy, scowling and ferocious, Mifune's performance in Rashomon was seemingly at odds with his debonair and charming true self. Oscar-winning director Steven Okazaki (Days of Waiting) skilfully plays with this dichotomy, switching from clips of Mifune's iconic roles to photos of the actor relaxing at home." (Sydney Film Festival)

A dutiful and diverting but rather bare-bones documentary portrait...

It's a brisk and energetic primer for those who don't know his movies or are ready to watch them again. And it doubles as a history of the chanbara (sword fighting) genre...

Mifune: The Last Samurai is a relatively short film that would have benefited from additional voices, as well as more Kurosawa-like sweep and Mifune-style verve.

A smart and thoughtful examination of who the man was and how he got that way.

Doc merely skims the surface of a cinematic legend.