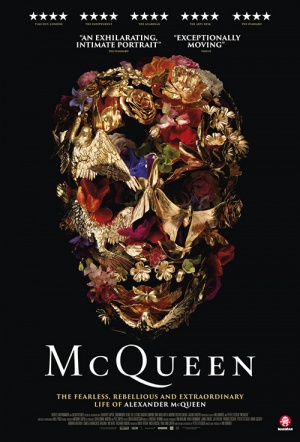 "London Eastender Lee Alexander McQueen started his career as an apprentice at Saville Row, before his rag-trade aunt put up the money for him to study at Central Saint Martins. The influential stylist Isabella Blow (who persuaded him to use his middle name, Alexander) championed McQueen after seeing his graduation show. By 27, McQueen was head designer at Givenchy. He went on to win British Designer of the Year four times. His controversial shows made headline after headline. Behind the scenes, he drove his staff too hard, abandoned close friends, and tragically lost his way. This stunning documentary is an appropriately lavish and multifaceted celebration of his life and boundary-pushing creations." (Sydney Film Festival)

Bonhôte and Ettedgui are blessed with intimate, candid interviews with many of the people who worked closest with McQueen, as well as archival interviews with his late muse and booster Isabella Blow and his beloved mother Joyce.

This intelligent, honest documentary explores McQueen's complex personality without getting tacky or tabloidy, or ignoring his dark side.

This appropriately flamboyant film explores McQueen's humble beginnings, his inspirations, his tight knit band of collaborators, his creative process and the violent brilliance of his work.

Rather than relying solely on archival footage, this well-sourced documentary is laced with anecdotal stories from friends and family who give an emotional account of the troubled artist.

In the crowded field of fashion docs, this one stands tall.

A solid if, given its subject, oddly workmanlike doc, this makes a very good case both that the fashion world had a genius on its hands, and that they didn't have a clue what to do with him.