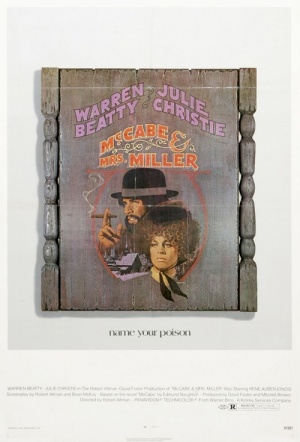 Warren Beatty and Julie Christie are the titular leads in Robert Altman's western - described as Altman's "perfect" movie by Roger Ebert - playing a gambler and a prostitute with a common interest that makes them business partners. Features a soundtrack of songs by Leonard Cohen. The film wasn't particularly well received on release, but over time has become known as a classic of 1970s American cinema, and named the eighth best Western ever by the American Film Institute in 2008.

Suffers from overlength; also a serious effort at moody photography which backfires into pretentiousness.

A pioneering film, in both senses of the word, and one of the key works in the American cinema of the 1970s.

I don't automatically object to contemporary allusions, but I prefer to find them myself, and McCabe and Mrs. Miller is so busy pointing them out to us that the effect is to undercut its narrative drive and the dignity of its fiction.

Looks even richer, stranger and more daring than it did when it first appeared back in 1971.

Robert Altman has made a dozen films that can be called great in one way or another, but one of them is perfect, and that one is McCabe & Mrs. Miller.

They say that great actors are never knowingly caught acting; Altman's best movies are similarly effortless - experiences to be lived in, rather than simply watched.