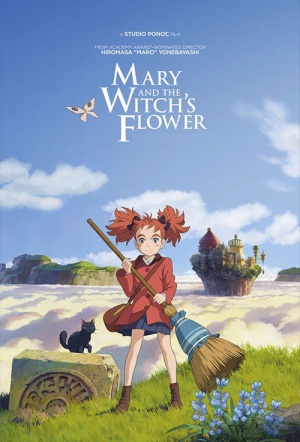 A young girl named Mary discovers she has the mysterious power to become a witch for a single night in this Japanese anime fantasy film based on The Little Broomstick by Mary Stewart. First feature film from Oscar-nominated ex-Ghibli lead producer Yoshiaki Nishimura's Studio Ponoc.

One day, Mary follows an odd cat into the nearby woods where she stumbles upon some magical flowers. Their magic brings her ordinary broomstick to life and suddenly it whisks her above the clouds and off to a strange place. There, she discovers Endor College, a magic school into which she enrolls and, despite a lack of magical knowledge, becomes a promising student. But she quickly discovers that there are strange experiments taking place behind closed doors, and all too soon, she comes face to face with great danger – and a life-changing choice.

Director Yonebayashi clearly fetishises the romantic countryside setting of such European stories for Mary's time with her family, the school itself is quite unlike anything we've seen, making it easy to understand why Mary might think she's dreaming.

Magic flows freely if not infinitely in "Mary and the Witch's Flower," an effortless animated charmer from the gifted Japanese director and Studio Ghibli veteran Hiromasa Yonebayashi.

A stirring adventure most suitable for tweens and teens.

A whimsical, winsome world of invention, gorgeously translated on screen by the animation team.