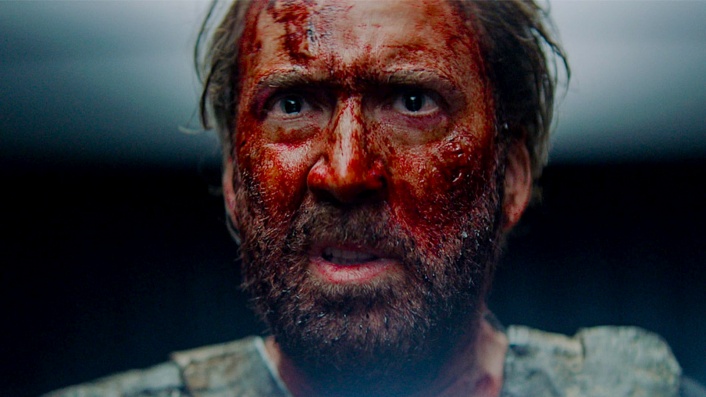 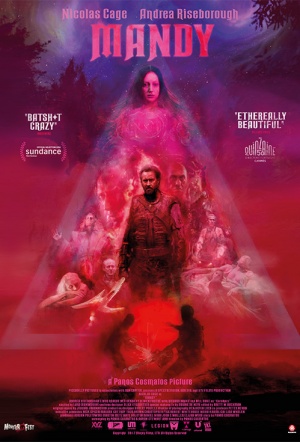 Nicolas Cage hunts down a religious sect in this revenge thriller from the director of Beyond the Black Rainbow. Co-starring Andrea Riseborough (The Death of Stalin), the film's concept art teases an epic one-on-one chainsaw battle.

"Somewhere in the primal wilderness near the Shadow Mountains in the year 1983, Red Miller (Cage) has fallen deeply for the beguiling Mandy Bloom (Riseborough). But the life he has made for himself comes suddenly and horrifyingly crashing down when a vile band of ravaging idolaters and supernatural creatures penetrate his idyllic paradise with vicious fury. A broken man, Red now lives for one thing only — to hunt down these maniacal villains and exact swift vengeance." (Sundance Film Festival)

Explaining Mandy is tricky. Is it an eighties pastiche? A goof presented as high art? An excuse for Nic Cage to bug his eyes out a lot?

[Nicholas Cage] works precisely because there is a great actor underneath it all and because he does tap into something so ferocious that other people wouldn't dare to touch.

Anyone with a taste for Nicolas Cage in full gonzo mode should get some fun out of its fever-dream progress.

Cage is just next-level here. Mandy is a sci-fi infused, technically stunning and deliriously inventive film that I adored from beginning to end.

Mandy may feel like a cult movie that assumes it already has a prefab cult...as a star vehicle, however, this film is fully scraping at the door.

As if its sole goal was to take the heavyweight title of Nicolas Cage's Craziest Movie Ever, "Mandy" exhibits what Shakespeare called "vaulting ambition" in producing the nuttiest ways for Cage to get into one phantasmagorical showdown after the next.

Mandy might not be everyone's idea of a satisfying nightcap, but this surrealistic revenge flick will likely earn a loyal following of its own.

Cosmatos' ability to putus in Red's head - overwhelmed at first with pain and fury, then saturated by the strange drugs he for some reason feels compelled to try - make this much more than the usual exercise in vicarious bloodshed.