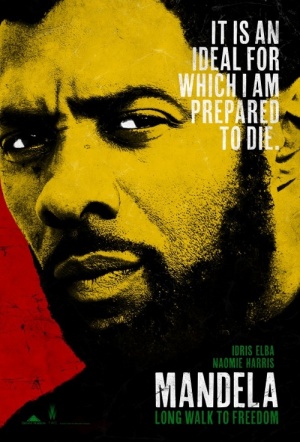 Idris Elba (The Wire) is Nelson Mandela in this biopic, based on the anti-apartheid revolutionary's autobiography, charting the struggles that took him from South Africa's rural Cape region to armed struggle and arrest, and then to the president's mansion as his nation's first democratically elected leader. Naomie Harris (Skyfall) plays Mandela's wife and fellow freedom fighter Winnie. Directed by Justin Chadwick (The Other Boleyn Girl).

"Born to be a Xhosa leader, he was trained in law, then drawn into resistance, then politics, then elevated to a reverence that approached sainthood. Mandela has lived one of the most remarkable lives of our time... Mandela is, above all, a love story. It's the story of Nelson and Winnie's passionate and troubled love affair that endured over decades. It's also the story of a leader who so loved his country that, through his beliefs, his actions, and his example, he transformed himself into the very embodiment of its greatest hopes." (Toronto International Film Festival)

Justin Chadwick's Mandela: Long Walk to Freedom aims high in trying to convey this amazing man’s life in just 140 minutes, when perhaps just a part of his story would have made for a more satisfying, less fragmented movie. Nonetheless, the strength of Mandela lies in the warts ‘n’ all humanity on display. This Nelson starts as no saint, taking up arms against a brutally oppressive regime before imprisonment transforms his violent struggle into one of peaceful resistance.

For all its failings, there is one thing that can't be denied: Idris Elba gives a towering performance, a Mandela for the ages.

Ambitious in its span and powerful in its recreation of tumultuous times, this is a skilful dramatisation and a worthy celebration.

As a primer, it's respectable; as cinema, it feels like a biblical gospel, always gearing up for the next big speech or moment.

Mr. Elba is completely convincing as a natural leader with a ferocious drive.

If it is a bit stately, that is understandable: his life story really is extraordinary. The movie pays homage - in good faith.

It's vivid, substantial and works hard to be worthy, but as it ticks off the milestones of a monumental life it flickers more often than it really catches fire.