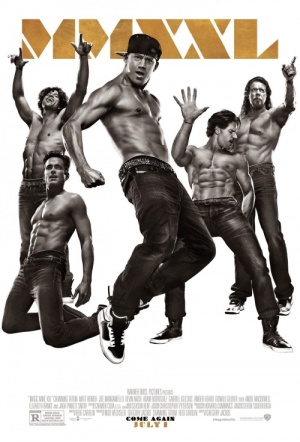 Channing Tatum revisits his exploits as a male stripper in this steamy sequel (that he also co-wrote). Three years after retiring, "Magic Mike" Lane reunites most of his old gang - with the exception of Dallas (Matthew McConaughey) - for one final explosive performance. Andie MacDowell, Amber Heard, Jada Pinkett Smith and Elizabeth Banks co-star alongside the sea of abs and testosterone. Stepping into the director’s chair is Gregory Jacobs, Steven Soderbergh’s (director of the original) long-time assistant director and co-producer.

“This isn’t bro time, this is show time!” So proclaims a strip club MC in the sequel to Steven Soderbergh’s 2012 surprise hit Magic Mike. XXL definitely contains more bro and show than its predecessor.

Magic Mike XXL is most fun when it isn’t trying to justify itself, but just kicking back with the guys.

Packed tight, Jacobs’ straightforward sequel may boast less up top than the Soderbergh-directed original, but still bulges where it counts.

It’s more glammed-up, rising above any element of tawdry exploitation, and is more of an outright comedy.

We’re always waiting for something important or interesting to happen, but it never really does.

This one takes all of the original’s surface — chiefly the hip gyrations — and none of the substance, interesting character arcs or charms.