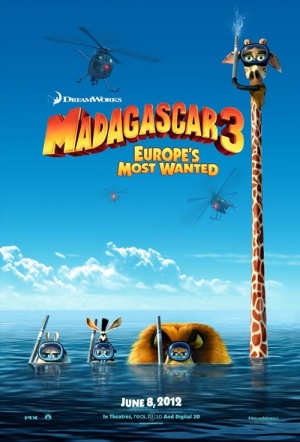 Stuck in Africa, Alex, Marty, Melman and Gloria endeavour to return to their beloved New York City zoo, via Europe, in the third DreamWorks Animation Madagascar flick. The plan goes awry and they find themselves pursued through Monte Carlo by fanatical animal control officer Chantel DuBois. Their only chance to escape? Run away and join a travelling circus.

Ben Stiller, David Schwimmer, Chris Rock, Jada Pinkett Smith and Sacha Baron Cohen return to lend their vocal cords. They're joined by Frances McDormand (voicing the wily DuBois), as well as Bryan Cranston, Jessica Chastain and Martin Short who provide voices for the four-legged - or flippered - circus animals. Intriguingly, the script is written by Noah Baumbach - director of The Squid and the Whale and co-writer of Wes Anderson's The Life Aquatic and Fantastic Mr. Fox.

This is the rare animated property that has consistently improved on its ho-hum origins.

Stiller, Rock and, er, Ali G can't quite prevent DreamWorks' shipwreck tale running aground. But the hip humour and star wattage make for a fun ride.

For the most part, 'Madagascar 3' is less interested in plucking the last bit of meat off the series’s bones than with simply picking the lowest-hanging fruit.

Where 'Madagascar 3' soars is in its visuals: A Monte Carlo chase is vertiginously madcap; a Cirque du Soleil-style spectacle dazzles with rich pastels; the 3-D effects have wit and invention. Kids will be stimulated. And, parents, you'll enjoy the sights.

A neon-saturated, high-flying trapeze act with enough frenetic funny business that it's a wonder the folks behind this zillion-dollar franchise about zoo critters on the lam didn't send the animals to the circus sooner.

Yes, it's a cartoon, but it's conspicuously unmodulated, with the volume set on high and the pacing all but pushed to fast-forward.

Credit Baumbach, credit the filmmakers, credit no one giving a damn anymore - for what's yet another hyperactive talking-animal children's movie, 'Madagascar 3: Europe's Most Wanted' is uncommonly rewarding, and a potential future stoner's delight.