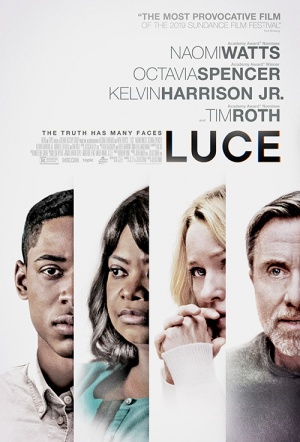 "It’s been ten years since Amy and Peter Edgar (Watts and oth) adopted their son from war-torn Eritrea, and they thought the worst was behind them. Luce Edgar (Harrison Jr.) has become an all-star student beloved by his community in Arlington, Virginia. His African American teacher, Harriet Wilson (Spencer), believes he is a symbol of black excellence that sets a positive example for his peers. But when he is assigned to write an essay in the voice of a historical twentieth-century figure, Luce turns in a paper that makes an alarming statement about political violence. Worried about how this assignment reflects upon her star pupil, Harriet searches his locker and finds something that confirms her worst fears." (Sundance Film Festival)

Naomi Watts, Tim Roth and Octavia Spencer are all excellent, but Kelvin Harrison Jr is the real star.

"Luce" preserves what a rock-solid piece of stage writing can achieve... while providing an opportunity you don't get in a theatrical setting, whereby audiences can study the faces of the central performers up close.

It's a drama that moves like a thriller with a stark, uncomfortable score and a series of seat-edge confrontations both heating up a difficult debate over trust, expectation and racial stereotypes.

This provocation about race, privilege and the expectations that come with both features a star-in-the-making Kelvin Harrison Jr. and adds up to some kind of wallop-packing miracle.

A deeply smart film about race and expectations.

"Luce" is a neatly constructed puzzle, an engrossing weave of suburban drama and sociopolitical whodunit.

A smart and sophisticated inquiry into race and class.

Though provocative enough to start some film-fest conversations, it's unconvincing on too many fronts to go far.