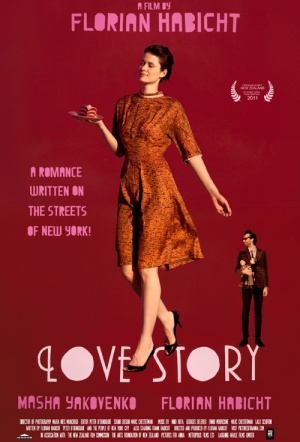 Florian Habicht's (Kaikohe Demolition) award-winning documentary (kind of, it's also a drama and a comedy and a romance) about love, cake and New York City, which brought the house down on the opening night of the New Zealand International Film Festival.

"Habicht and Masha Yakovenko make a gorgeous duo in Love Story, in which the director-actor plays himself, a Kiwi Film-maker in New York, who meets a Russian woman (Yakovenko) on the subway, falls in love, and convinces her to make a movie about their blossoming romance. Although how much of it is real is for the audience to decide... what ever the case, the movie looks to catapult the eccentric filmmaker to new heights." -Scott Kara, Canvas Magazine.

"It follows Florian, in New York, as he pursues Masha - a beauty he spies on the subway one day, carrying a single slice of cake on a plate. Infatuated, Florian asks the people of New York, a psychic and his dad (via Skype) for advice on love and also "What should happen next in the movie?" You've never seen a film like this." -Flicks.co.nz NZIFF 2011 Review.

The film's charm has a slightly unsettling side too: at one point we sense that Masha and Florian may have different perceptions of what's happening - and our own may be one of theirs, or another perspective altogether. It's an entirely intentional bending of the rules and part of what you might call a dark playfulness that has distinguished everything this unique and original film-maker has done. This deserves to become a Kiwi classic...

Habicht’s deft hand weaves together all of Love Story’s wayward strands into a single joyous, effusive tapestry, which graces the screen beautifully in its own riotous fashion.