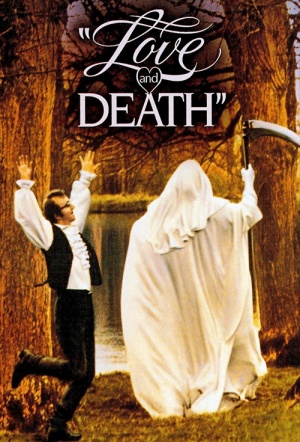 In czarist Russia, a neurotic soldier (Woody Allen) and his distant cousin formulate a plot to assassinate Napoleon.

Set in 19th-century Russia, Allen is a cowardly serf drafted into the Napoleonic war, who would rather write poetry and obsess over his beautiful but pretentious cousin. Allen's cowardice serves him well when he hides in a cannon and is shot into a tent of French soldiers, making him a national hero.

Love and Death is an almost total treat.

Besides being one of Woody's most consistently witty films, "Love and Death" marks a couple of other advances for Mr. Allen as a filmmaker and for Miss Keaton as a wickedly funny comedienne.

"Love and Death" has been mapped out as a fully thought-through film. It's a lot more mature than the anything-goes style of earlier Allen movies like "Bananas."

One of the 'early funny ones', this has a high gag count and is a favourite of most Woody fans.