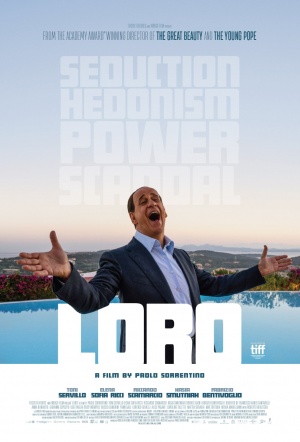 "Sorrentino places us in the seedy orbit of Sergio (Riccardo Scamarcio), a handsome young guy-on-the-make whose ambition is to leave his provincial southern city of Taranto for Rome and get close to Berlusconi (Toni Servillo). His means of doing so is sordid but highly effective. Trafficking beautiful young women as escorts to attend parties and events proves to be his stepping stone into the halls of power. Once Sergio has arrived, so to speak, the increasingly embattled Berlusconi becomes the focus ... Taken to task by his long-suffering, (soon to be ex-) wife, Veronica Lario (Elena Sofia Ricci), a woman of cool self-possession, and abandoned by his political allies, the fallen PM is left to fumble with the private realities behind his public scandals, and this is where the true power of Loro finally lies." (Toronto International Film Festival)

Italian director Paolo Sorrentino makes decadent and intoxicating dramas. His new film about the life of former Prime Minister of Italy, Silvio Berlusconi, is no exception.

[Paolo Sorrentino] embraces the corruption, the vulgarity and the extravagance with a certain tenderness, rather than envy.

There are enough fantastic sequences in Loro, and another great performance from Servillo, but this is a slight disappointment given what we've come to expect from Sorrentino.

A richly inventive, ferocious feast of satire and vulgarity.

....a memorable piece of work.