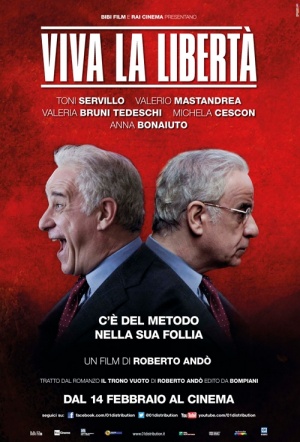 "Enrico Oliveri (a brilliant Toni Servillo) is a seasoned center-left politician and president of the opposition who realises that the decline of his party is inevitable. As the polls announce he will lose dramatically in the upcoming elections, he falls into a profound existential crisis and disappears. We later learn that he has fled to Paris and is hiding out at the home of his ex-girlfriend Danielle (Valeria Bruni Tedeschi). While his colleagues panic, his top aide (Valerio Mastandrea) discovers that Enrico has a twin brother living in a psychiatric institution. What at first seems like a crazy plan soon proves to be their only solution. A scathing critique of Italian political dynamics, Andò’s film is also a pulsating thriller with great comic moments that brings together some of the most talented actors working in Italy today." (Film Society Lincoln Center)

This winking critique of Italian politics offers several pleasurable digs at the establishment, though its staid craftsmanship and general lack of vitriol don’t provide the bite most politically inclined auds will expect