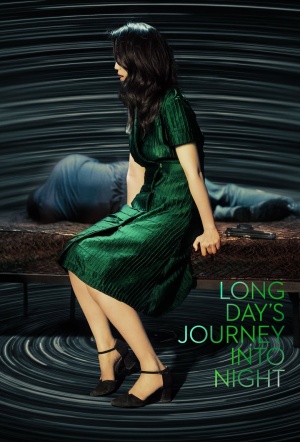 "The film chronicles the return of Luo Hongwu (Jue Huang) to Kaili, the hometown from which he fled many years before. Back for his father's funeral, Luo recalls the death of an old friend, Wild Cat, and searches for lost love Wan Qiwen (Wei Tang), who continues to haunt him. Sculpting in time and space through virtuosic technical feats, Bi's film yields successive visual and aural delights. With talismanic cues and motifs of uncanny doubling, the film is bisected — its first half recast through a vertiginous, trance-inducing, hour-long single take in 3D. A hushed, hypnotic study of hazy memory, lost time, and flight — and featuring the formidable Sylvia Chang as Wild Cat's mother — Long Day's Journey Into Night leads the viewer on a nocturnal, labyrinthine voyage, one that both reveals and conceals a world of passion and intrigue." (Toronto International Film Festival)

Comes up short in substance.

Very often, and particularly in its second half, watching it feels like dreaming with your eyes open.

There are certain dreams that don't make much sense at the time, but leave a great sense of yearning when they're over. That's true of young Chinese director Bi Gan's remarkable second feature in more ways than one.

What matters is what has already happened, even if it can't be precisely recalled, not what transpires in front of the camera. The wisp of a story is really just the occasion for impressionistic musing and evocative picturing.

In one sublime feat of cinematic prestidigitation, Bi forges new possibilities by which movies can defy the constraints of logic and represent the unrepresentable.