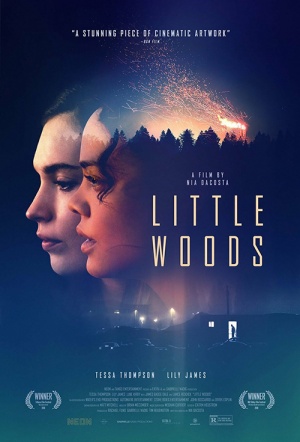 "Ollie (Tessa Thompson, Creed) is just getting by in economically depressed Little Woods, a fracking boomtown in North Dakota. She has left her days of illegally running prescription pills over the Canadian border behind her, eyeing a potential new job that would finally break her out of the small town. But when her mother dies, she is thrust back into the life of her estranged sister Deb (Lily James, Baby Driver), who is facing her own crisis with an unplanned pregnancy and a deadbeat ex (James Badge Dale, The Departed) ... As both bills and pressure mount, Ollie faces a choice: whether to return to a way of life she thought she’d left behind for just one more score." (Tribeca Film Festival)

Little Woods is a story of two women doing their best. With the end of her parole approaching, weary Ollie (Tessa Thompson) is looking to get out. She insists she’s done with running pills across the border, but when debt collectors come after her house and her sister Deb (Lily James) finds out she’s pregnant, Ollie has to do what she has to do.

It's a testament to the strength of Thompson's performance, and DaCosta's control of tone and action, that for all the bleakness of this world, we keep watching.

Nia DaCosta's absorbing debut is laced with urgent dread, experienced by characters you care deeply about.

[DaCosta] intuitively reveals a deeper dimension to both of her heroines by taking an extra beat at the beginning or end of scenes to observe their faces when no one else is watching.

A searing indictment of the US health system and lament for the loss of the fabled "American dream", Little Woods also makes for riveting viewing.

Nia DaCosta's heartland tale, rough around some edges, is a promising feature debut.

The acting is spot on. Thompson and James work brilliantly off each other, showing that sometimes our life choices are only as good as our options, and their struggle to get affordable women's health care in North Dakota.

The life-on-the-margins drama makes a fine, tense vehicle for Tessa Thompson, who in the last few years has stood out in a variety of genres.

The suspenseful quest for survival provides the stimulus for the whole transfixing and eye-opening running time.