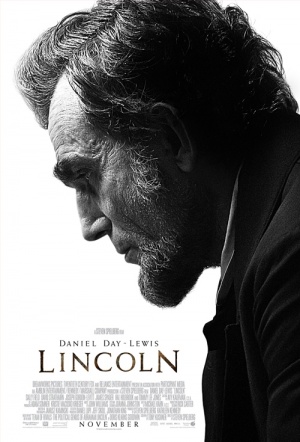 Steven Spielberg's political biopic of the 16th President of the USA, written by Pulitzer Prize-winning playwright Tony Kushner. Focusing on the final four months of his life, Lincoln (Daniel Day-Lewis, winner of the Golden Globe for this performance) clashes with members of his cabinet on the road to abolishing slavery and ending the American Civil War.

Unsatisfied that his Emancipation Proclamation will be enough to safeguard the freedom of slaves after the conclusion of fighting, Lincoln seeks to push a 13th Amendment to the U.S. Constitution through the House of Representatives that would formally bring slavery to an end. To do so, Lincoln will need to convince members of his own Republican party and win over enough Democrats to pass the vote. The task will require the politician's famed debating and speechmaking skills, but also a dabble in unsavoury methods in the shadows of democracy.

Kushner's screenplay is based on Doris Kearns Goodwin's biography Team of Rivals: The Political Genius of Abraham Lincoln. The cast also includes Sally Field as Lincoln's wife, Joseph Gordon-Levitt as his son, Tommy Lee Jones as a Congressional leader and Jackie Earle Haley as the secessionists' Vice-President.

Every choice Day-Lewis makes lends dignity and gravitas to America's most revered figure.

Steeped in the bitter political divisions of the Civil War, Spielberg’s thrilling film about hardwon freedoms is immersed in its own time, but speaks eloquently to ours.

A rough and noble democratic masterpiece — an omen, perhaps, that movies for the people shall not perish from the earth.

What a feat from Day-Lewis: the nearest thing a 21st-century biopic can get to a seance.

The hallmark of the man, performed so powerfully by Daniel Day-Lewis, is calm self-confidence, patience and a willingness to play politics in a realistic way.

There is nothing bravura or overly emotional about Spielberg's direction here, but the impeccable filmmaking is no less impressive for being quiet and to the point.

An absorbing, densely packed, sometimes funny telling of the 16th president's masterful effort in manipulating the passage of the 13th amendment.

As unexpected as it is intelligent, thanks to virtuoso work from Spielberg and Kushner, Lincoln is landmark filmmaking, while Day-Lewis is so authentic he pulls off that stovepipe.