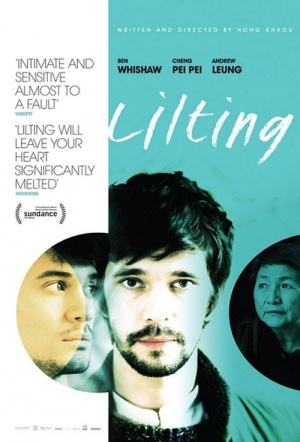 Ben Whishaw (Perfume) stars in this intimate drama about a distraught mother and her late son's lover who find an emotional middle ground, despite not sharing the same language or culture. Winner of the cinematography award at the 2014 Sundance Film Festival.

"The sudden death of a young London man named Kai leaves his headstrong Chinese-Cambodian mother, Junn, and his boyfriend, Richard, each in a personal and profound state of grief. Feeling a strong sense of responsibility toward Kai’s only family member, Richard reaches out to Junn, who has been biding time in an assisted-living home. Though Junn speaks little English, her dislike of Richard is plain, and she meets him with stony resistance. Since they share no common language, Richard hires a translator to facilitate communication, and the two improbable relatives attempt to reach across a chasm of misunderstanding through their memories of Kai." (Sundance Film Festival)

This is a quiet, thoughtful London-set study of love, grief and cultural differences.

A thoughtful film whose lilting tones occasionally border on the listless.

The relationship between Junn and Alan is perhaps a little contrived, but Lilting is an affecting story.

A quietly unique meditation on love and loss from Cambodian director Hong Khaou.

Thanks to the delicate, multilingual set-up, almost every exchange carries an unpredictable dramatic charge.

It's difficult to make a compelling film that begins in the midst of emotional disconnect, and Khaou never quite finds his rhythm.

Muted British chamber piece about two hitherto unconnected Londoners struggling with the loss of the young man they both loved.

Whishaw is the most gifted and poetic actor in his age range, by a very wide margin, and everything he does here is fresh and unexpected.

Despite a strong start, the filmmaker doesn't exactly know where to go with it.

A more fitting title for the film would be "Limping."

A deft and delicate drama.

Delicate and unhurried almost to a fault, though also hauntingly sexy and even humorous at times.