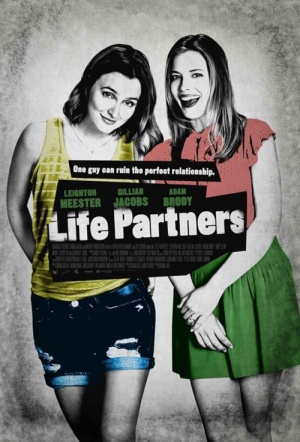 Independent romantic comedy about two co-dependent besties (Gossip Girl's Leighton Meester and Community's Gillian Jacobs) - one straight, the other lesbian - and the man (Adam Brody, The O.C.) who comes between them.

"At 29, the most long-term relationship Sasha (Meester) and Paige (Jacobs) have ever been in is with each other, using their friendship as an excuse not to venture out into the dating world alone. But when Paige meets nerdy Tim (Brody) and starts to get serious for the first time, the nature of their friendship begins to shift. Fearing she’s being cast aside, Sasha tries to keep their relationship the same, but does growing up also mean growing apart?" (Tribeca Film Festival)

A well-scripted, intriguingly-acted effort to mine the theme of prolonged adolescent best-buddyism through two women.

Limited by the same arch tone and flippant jokes that suffocate every other low-budget indie about Gen Y confronting adulthood.

Fogel and Lefkowitz go for a loose, funny vibe that allows them freedom to serve a range of different characters and subplots, but the center of their movie doesn't hold.

Meester and Jacobs have an easy, authentic chemistry, but there isn't enough structure or storytelling thrust to sustain interest in the plot: Triumphs, calamities and reunions keep happening, but none contains real dramatic heft.

The two stars display a winning chemistry in this amusingly observant study of female friendship.