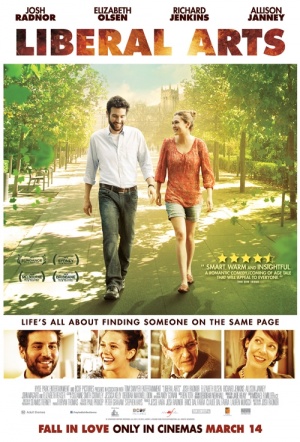 Written, directed and starring Josh Radnor from How I Met Your Mother, this coming-of-age drama follows a mid-thirties bookworm who forms a semi-romantic bond with a 19-year-old college student (Elizabeth Olsen).

Newly single, 35, and uninspired by his job, Jesse (Radnor) worries that his best days are behind him. When his old college professor invites him to campus to speak at his retirement dinner, Jesse jumps at the chance. He is prepared for the nostalgia of the dining halls and dorm rooms, the parties and poetry seminars; what he doesn’t see coming is Zibby (Olsen) - a beautiful, precocious, classical-music-loving sophomore. Zibby awakens long-dormant feelings of possibility and connection that Jesse thought he had buried forever.

The harder Mr. Radnor strains to make you love his alter ego, the more resistant you become.

Despite a misjudged ending, Liberal Arts is a decent, heart-on-the-sleeve movie; it pays its audience the compliment of treating us like intelligent people.

It's the kind of film that appeals powerfully to me; to others, maybe not so much.

A light and lively comedy of manners about college, literature and a midlife crisis that hits earlier than expected.

You'd do well to take the film's advice: read a book instead.

A coming-of-middle-age comedy running on somewhat less than a full tank.

Strong writing, great performances (Olsen is the real deal) and a touching, upbeat tale for the big-brained and big-hearted.