Legend of the Guardians: The Owls of Ga'Hoole 3D 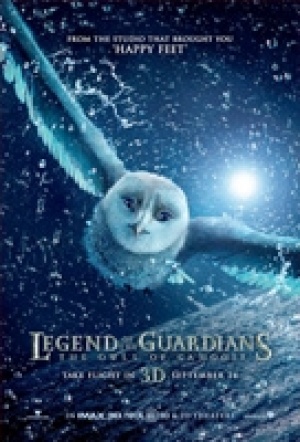 Zack Snyder, director of Watchmen and 300, turns his highly-stylised attention to an adaptation of a series of children's novels about a group of heroic owls, Guardians of Ga'Hoole.

Soren (voiced by Jim Sturgess), a young barn owl, is kidnapped and taken to St. Aggie's, an orphanage where owlets are brainwashed into becoming soldiers for the Pure Ones – a gang of evil birds led by Nyra (Helen Mirren). He and his new friends escape to the island of Ga'Hoole, to assist its noble, wise owls who fight the good fight against his captors.

Legend of the Guardians: The Owls of Ga'Hoole 3D / Reviews

Though visually stunning and blessed with immaculate 3D work, film is fatally bogged down by tackling an essentially ridiculous premise (gladiator-attired owls fight genocide) with stony solemnity, and by subsisting on a note of sustained menace and terror in what is ostensibly a children's film.

Legend of the Guardians may be a hoot, but for all its pyrotechnics, it fails to soar.

The script is merely serviceable and too reminiscent of similar fantasy tales. But kids will instantly relate to the gentle Soren, while watching wide-eyed as he faces each challenge.

There's a confusion that you can sense as well, with the film pulled between its light and dark sides just as the owls struggle with forces of good and evil. That hesitation keeps "Guardians" from reaching the deep, emotionally rich center that confers greatness in the animation world.

This picture sometimes rivals "Avatar" in its spectacular landscapes and thrilling flying sequences, but of course it won't come anywhere near those megagrosses, and it's too scary to be wholeheartedly embraced by children.

Legend of the Guardians: The Owls of Ga'Hoole 3D / Trailers