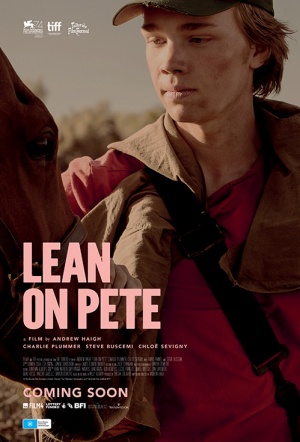 A 15-year-old homeless teen (Charlie Plummer, The Dinner) goes in search of his only known relative in this drama co-starring Steve Buscemi and Chloë Sevigny.

"Charley is a 15-year-old lost soul, pent up in a fleabag Portland apartment with his abrasive father. He goes looking for a summer job and ends up meeting Del (Buscemi), a grizzled horseman kicking around the small-time circuit training and racing quarter horses with his partner, Bonnie (Sevigny), a jockey. In no time they become an inseparable trio, and Charley discovers a genuine love for the animals. He grows particularly attached to a failing racehorse named Lean On Pete. But when he discovers that his beloved horse has reached the end of his racing days and is due to be disposed of by the unsentimental and practical Del, Charley ends up on a cross-country adventure through the beautiful mountains and plains of the interior." (Toronto International Film Festival)

This stunning adaptation of author Willy Vlautin's novel Lean on Pete is not your average coming-of-age film.

It's frustrating to watch, but designed in such a way that the boy's loneliness will haunt long afterward.

There's tragedy here, but what's most winning about Lean on Pete is how Haigh never lingers on misery. He's as interested in surprising kindnesses and the goodness of most folks as he is in life's knocks.

If this story of a lonely young life lived on the hoof leaves us craving stillness and closeness, then surely that's mission accomplished.

Haigh's film is never less than heartfelt and affecting. It cares deeply for Charlie and hopes we do, too.

A favourite of many who saw it at this year's New Zealand International Film Festival, Lean on Pete is well worth seeking out if you can find it on its shamefully limited general release over the next couple of weeks.

There's a wistful quality to the storytelling which softens some of the sharper edges of tragedy and hardship in this undeniably affecting picture.

A much deeper and far more meaningful experience, and no question one of my favourite watches of the festival schedule.​

What reads on the surface like an archetypal tale of a boy and his horse becomes an affecting snapshot of the contemporary American underclass in Andrew Haigh's lovely, slow-burning drama, Lean on Pete.