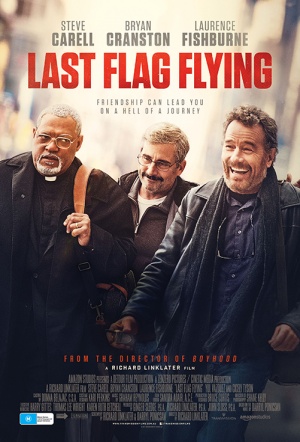 In 2003, 30 years after they served together in the Vietnam War, former Navy Corps medic Larry “Doc” Shepherd (Carell) re-unites with ex-Marine Sal Nealon (Cranston) and Reverend Richard Mueller (Fishburne) on a different type of mission: to bury Doc’s son, a young Marine killed in the Iraq War. Doc decides to forgo burial at Arlington Cemetery and, with the help of his old buddies, takes the casket on a bittersweet trip up the East Coast to his home in suburban New Hampshire. Along the way, Doc, Sal and Mueller reminisce and come to terms with shared memories of the war that continues to shape their lives.

Last Flag Flying is at once burdened and enriched by the past. Richard Linklater’s film sets itself a tall order, attempting to evoke the “spirit” of The Last Detail, Hal Ashby’s gritty jewel of ‘70s American cinema. Not only is The Last Detail among Ashby’s best-loved films, but also a key work in the Vietnam War-disillusioned “New Hollywood” movement and home to one of Jack Nicholson’s most spellbinding performances. It’s like following up Chinatown years later with The Two Jakes: there’s merit in the endeavour but the result generally plays like a faint echo of what once was.

The movie is so laden it's hard to endure. But worth it.

The central reason that "Last Flag Flying" fails to take wing is that its characters don't ring true. Not really. You never feel, in your bones, that you're watching battle-scarred veterans.

It's a major film pitched just above a whisper.

Even if "Last Flag Flying" isn't quite persuasive, it is nonetheless enormously thought-provoking, and its roughness is a sign of how earnestly it grapples with matters that other movies about war prefer not to think about.

Yet another Linklater hangout movie, with minimal plot and maximum room for anti-establishment rhetoric and reflections on the passage of time.

An understated gem and a fabulous showcase for a triumvirate of American acting titans.

It's a sharp critique of American bluster, but also a sincere and funny valentine to everyday American life.