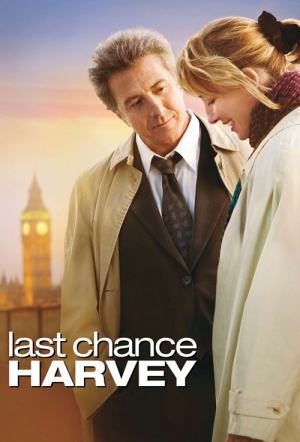 Baby boomer romance with Dustin Hoffman and Emma Thompson. Hoffman plays New York jingle writer Harvey (Hoffman), who upon arriving in London for his daughter's wedding is informed she wants her step-father to give her away. Royally hacked off and trying to hide his dissapointment, Harvey skips the reception heading straight to the airport. But he misses his plane anyway. When he calls his boss to explain he won't be back at work on Monday, he's fired on the spot. While drowning his sorrows in the Heathrow bar, he meets Kate (Emma Thompson), an airport worker with a few problems of her own. Both their lives are changed as a new relationship blooms amid some of London’s most scenic locales.

Stars Dustin Hoffman and Emma Thompson (reunited after 2006's "Stranger Than Fiction") are so disarmingly charming that even the most treacly moments work an emotional magic.

There’s something irresistible about watching two people fall in love, even in contrived, sniffle- and sometimes gag-inducing films like Last Chance Harvey.

Last Chance Harvey is a tremendously appealing love story surrounded by a movie not worthy of it.

Writer/director Joel Hopkins seems lost in a limbo between attempting a film of true intimacy, and the grandstanding of his English romcom stablemates like Four Weddings and a Funeral and Love Actually.

Imagine Paddy Chayefsky's "Marty" saddled with more sentimentality and sprinkled with a few more laughs and you pretty much have Last Chance Harvey.