It is usually a fail-proof formula for British filmmakers: gorgeous 19th century costumes, lavishly detailed period sets, and an angel-faced murderess who eliminates her oppressors. The film Lady Macbeth (2017) has the right ingredients but the whole barely rises above its parts. Apart from its classic title, this darkly Gothic adaptation of an 1865 Russian novel has no connection and bears no resemblance to the works of Shakespeare.

Like many literary works from this era, the storyline is linear and predictable. Teenage bride Katherine (Florence Pugh) was sold to an older man and is now trapped in an oppressive and loveless marriage. Dominated by both her husband Alexander and live-in father-in-law Boris, Katherine is forbidden to go outside the house and must exist as an adornment, reading her bible and tolerating abuse. When the men go away for a few days, Katherine experiences such simple freedoms as walking in a field on a sunny day. She encounters a brash young farm hand Sebastian (Cosmo Jarvis) who later forces his way into her bedroom and they become lovers. All of Katherine’s senses are ignited and she is determined to rebel against her wardens. Her affair becomes known and one by one she coolly despatches her tormentors. When she is accused of murder she frames Sebastian and the story concludes with evil triumphant.

This is a visually well-crafted period drama but not one of its characters is more than a two-dimensional caricature. Although beautifully photographed, the characters are devoid of inner beauty. Stilted performance style and minimalist dialogue may work well as a stage-play but it struggles to translate comfortably to the modern screen. Silence is used to heighten tension but it mostly amplifies the emptiness of Katherine’s life and the shallowness of the narrative. For example, the reasons for her mistreatment are left unexplored, and her apparently limitless capacity for cold-blooded criminality left unquestioned. While the normally expressive Florence Pugh gives a mostly convincing performance, at times she appears bored and emotionless and even in the lovemaking scenes conveys an air of wishing she was acting in a different film. As the 19th century was not known as one of feminist sensitivity, the original play most likely was a study of an evil woman’s potential to disrupt the social order. In the modern era, the issue of female empowerment is more nuanced and intelligent than we see explored in this film.

It may be that applying modern cinematic expectations to a Russian classic is unfair. When it was first performed in Moscow, legend has it that Stalin stormed out and condemned the work for “tickling the perverted taste of the bourgeoisie”. The very of thought of a woman taking control of her life through multiple killings must have terrified the power elite. In that context, Lady Macbeth may be a solid work. But serious drama today expects more depth of characterisation and complexity of narrative interpretation. On these measures the film tends to underwhelm. 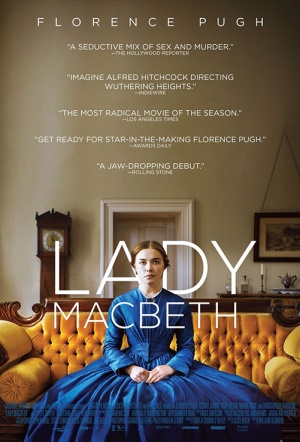