Dreamworks is back with one of their strongest animated franchise with Kung Fu Panda 3.

Dreamworks is back with one of their strongest animated franchise with Kung Fu Panda 3. With now having a trilogy, does the third film live up to it’s predecessors in delivering a solid film to form a solid trilogy?

Po has been training under Shifu’s tutelage for quite some time now. However Shifu feels that he’s got no more to teach the Dragon Warrior therefore the student has to become the teacher. While he also tries to reconnect with his biological father, Li (Bryan Cranston) and also face a dangerous threat the Spiritual Warrior, Kai (J.K. Simmons).

It goes without saying that Kung Fu Panda is one of the most beautifully animated franchise that’s ever made. And in Kung Fu Panda 3 it carries this same accolade, as this film was beautifully done. It’s gorgeous to look at and the animation of the characters felt genuine. The fight choreography between the animals themselves is still top notch.

The movie itself is humorous, it’s very charming the interactions between Po’s adoptive father and his biological father is adorable and very fun to watch. Speaking of Li, Bryan Cranston is great in the movie, he sounds like he’s having a lot of fun and in return forms this great chemistry with Jack Black’s character.

Now along with Po the rest of the crew is back, The furious five are still voiced by the same actors/actresses who voiced them on the first film. Now that’s great but they don’t have much to do apart from Tigress who plays a small role in the film.

The villain is probably my least favorite Kung Fu Panda villain. As he’s not given a decent backstory and though the film shows that he’s an incredibly strong opponent you just don’t care for him all that much. He doesn’t feel threatening and he makes jokes several times which makes it hard to take him seriously. That said he’s got a pretty sweet theme song.

Despite it’s flaws Kung Fu Panda 3 is still a solid film. The story itself isn’t great but it’s not bad either, there’s a lot of positive message to be taken from the movie, a lot of it is motivating one’s self and for a kid’s movie it’s a solid film. Probably the lesser out of all the three film however, it makes then Kung Fu Panda as a whole, a great trilogy.
0 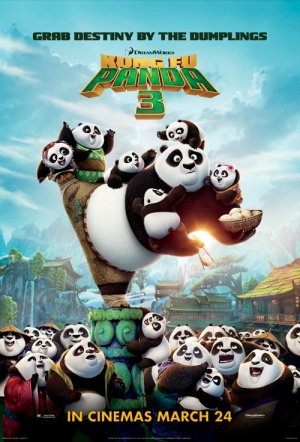