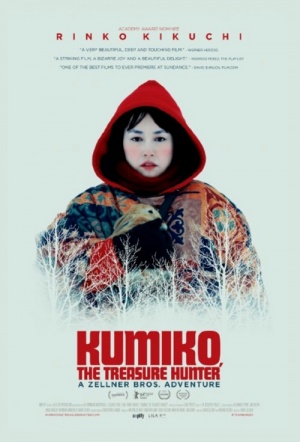 Sundance-winning drama based on the urban legend of a lonely Japanese woman (Rinko Kikuchi, Pacific Rim) who, after watching the Coen brothers' 1996 thriller Fargo obsessively, is convinced the events depicted are true and sets off to America in search of the buried money.

"Kumiko lives in a cluttered, cramped apartment in Tokyo with her pet rabbit, Bunzo. She works as an office lady, robotically preparing tea and fetching dry cleaning for her nitpicky boss. But on her own time, she obsessively watches a well-known American film on a weathered VHS tape. Rewinding and fast-forwarding repeatedly, she meticulously maps out where a briefcase of castaway loot is buried within the fictional film. After hours of intense research—convinced that her destiny depends on finding the money—Kumiko heads to the United States and into the harsh Minnesota winter to search for it." (Sundance Film Festival)

A beguiling fable of buried treasure and movie-fed obsession.

The result is a fascinating – at times illuminating – tightrope act, but rarely an enjoyable one...

Strange as it sounds – and is – Kumiko comprises a lingering display of empathy for its heroine, marching stridently on through her own peculiar headspace.

There's a spooky poetry to the climactic sequences.

The film's chief delight -- and it is, for the most part, quite delightful and quirky -- lies in these marginal characters.

A work of rigorously disciplined eccentricity... at once entirely accessible and yet appealing only to a rarified crowd ready to key into its narrow-bandwidth sense of humor.

Will make you feel as if you’ve just seen something hypnotically original.