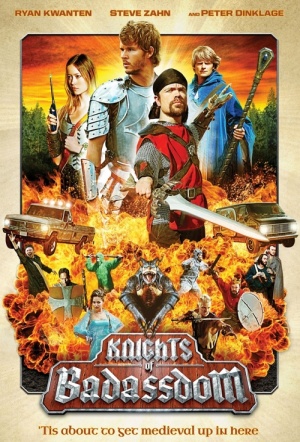 Comedy-horror about a group of roleplayer nerds who accidentally summon a demon from the underworld. Stars Peter Dinklage and Steve Zahn.

Joe (Ryan Kwanten, True Blood) has just been dumped and follows his live-action roleplaying friends (LARPers) into the woods rather than stay home and feel sorry for himself. There he meets ass-kicking, intimidating LARPer Gwen (Summer Glau, Terminator: The Sarah Connor Chronicles) and is plunged into a surreal adventure when a make-believe wizard (Steve Zahn, Treme) casts an all-too-real spell from an ancient book. That spell releases an hell demon with a taste for human blood, and souls.

The movie hit the news when the films producer recut director Joe Lynch's edit - so the version released is unfortunately not approved by Lynch.

Even while it's apparently not what its creators intended, Knights Of Badassdom is perfectly enjoyable in a low-key way, with sharp performances and a nigh-endless string of cameos.

Actually delivers everything the 2011 Danny McBride-James Franco comedy Your Highness purported to be but fell short on.