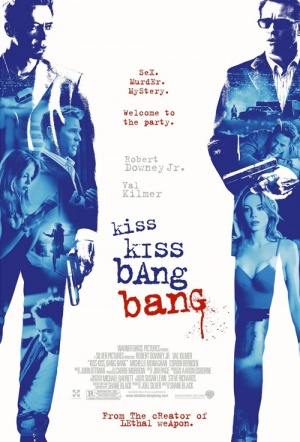 Before they worked together on Marvel’s Iron Man 3, writer-director Shane Black and Robert Downey Jr. made this trippy cult classic crime-comedy about a thief (Downey Jr.) posing as an actor who winds up in the middle of a murder investigation alongside a private eye (Val Kilmer) and an actress in employment limbo (Michelle Monaghan).

Before this, his directorial debut, Shane Black was a screenwriting wunderkind of the 1980s, penning the wildly successful Lethal Weapon, Lethal Weapon 2 and reputedly most-uses-of-the-f-word-in-history flick The Last Boy Scout (as well as a memorable acting turn in Predator). By the time of Kiss Kiss Bang Bang, Black had been largely invisible for nearly a decade since writing 1996's The Long Kiss Goodnight, but showed he'd lost none of his snarky wit - from the title onwards, which riffs on film critic extraordinaire Pauline Kael.

Perhaps too clever for its own good and so confusingly dense one is tempted to stop trying to follow the plot and just go along for the ride.

An ultra-knowing exercise in genre deconstruction, and something of a charmer to boot.

A very writerly film, incessantly displaying a preoccupation with its own storytelling structure and cheekily blowing the lid off other movies' tropes and wiles.

Contains a lot of comedy and invention, but doesn't much benefit from its clever style.

A roller-coaster ride through the funhouse of Tough-Guy P.I. Fiction.

Bold and breathless, this hilarious, know-it-all comedy-thriller will have you reliving its ironic spoils for days, but you'll still be hard-pressed to nail the actual story.