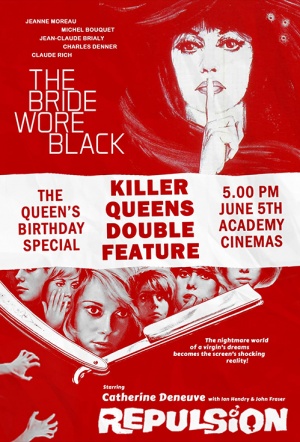 Repulsion
1965 Roman Polanski thriller starring Catherine Deneuve as a sex-repulsed woman who, disapproving of her sister's boyfriend, sinks into depression and has horrific visions of rape and violence.

The Bride Wore Black
Jeanne Moreau is a widow out for the revenge of her late husband in this adaptation of Cornell Woolrich's 1940 novel of the same name. Helmed by three-time Oscar-nominated director François Truffaut (Jules and Jim).