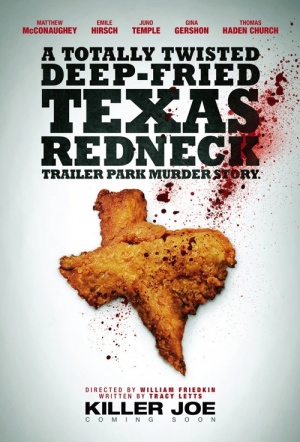 From master filmmaker William Friedkin (The Exorcist, The French Connection), a Texan crime-thriller starring Matthew McConaughey as a hitman hired to kill his client's own mother for a life insurance windfall.

When Chris (Emile Hirsch, The Darkest Hour) has his stash stolen by his mother, he needs a way to pay the higher-ups $6,000 before they send him to an early grave. In both an act of revenge and desperation, he hires 'Killer Joe' (McConaughey), a full-time cop and recreational gun-for-hire, to put a bullet in his mother and claim the $50,000 insurance. However, Joe isn't cheap. Demanding a promise of payment, he forces Chris to put his sister Dottie (Juno Temple, The Three Musketeers), to whom Joe's taken a disturbing shine, up for collateral.

Twistier than an East Texas back road.

Killer Joe will both infuriate and impress, but when it impresses there is nothing quite like it.

A likeably unpleasant slice of adults-only Texas noir, which aims at the funnybone as much as the jugular...

Thanks to McConaughey's oily power and Friedkin's unflinching purpose it's a compelling beast.

Lovely to see Friedkin on such mischievous form and McConaughey finally revealing his dark side.

Throughout, the actors grippingly and fearlessly delight in etching their characters’ incompatible agendas.

Friedkin has crafted another enjoyable slice of frenzied pulp minimalism.

Lurches from realism to corn-pone absurdism and exploitation-cinema surrealism.

Matthew McConaughey is on fire in Killer Joe, fierce and ferociously funny.

Friedkin makes no attempt to soften the characters' monstrousness, and thank hell for that.