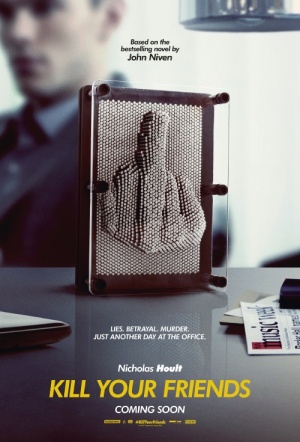 Nicholas Hoult (Mad Max: Fury Road) is Steven Stelfox, an  A&R man in the London music industry who is lying and backstabbing his way to the top – powered by drugs, sex, alcohol and his own greed. When Stelfox’s career faces a slump, he is forced to kick his ruthless work ethic up a notch.

Based on the novel by John Niven, who drew upon his brief music industry career, during which he passed on the opportunity to sign both Coldplay and Muse.

Nicholas Hoult embodies the psychosis of the 1990s British music industry in this initially sharp, increasingly tiresome and violent satire.

Fitfully amusing but too tired to convince.

The difficulty with black comedy is avoiding overkill and Kill Your Friends is a dictionary definition of the word.

Nicholas Hoult does his best to bring Niven's weapons-grade scumbag to life, in a film hobbled by amateurish acting and absence of production value.