The Park is not extinct.. yet!

Admission: I LOVE dinosaurs. That fact will always colour my impressions of these films. I could happily take all of them and edit out the story and just watch the beasties at play!
That said, I can still cast a critical eye over them. I recently watch the original and version 3 and still find them both effective for different reasons. The first is both tension-filled and contains an excellent range of characters. The third went more for humour, which I didn't mind and it worked well for me. The latest version seems to be somewhere inbetween (By the way, why has no-one considered adding David Atenborough to these films? Having him pop up as a cameo doing his thing would be a delightful addition and a nod to his late brother).
Anyway, how does this latest incarnation of the Park shape up? Damn well as an average action flick. But it lacks the x-factor of the aforementioned films. The actors are all dependable in their roles, but kind of disposable, too. Literally in some instances! Again we have kids in danger - just once I'd like to see one of them disappear down a dino's throat! I was kind of wishing Laura Dern would get a chance to be at the helm, but no luck. It could have picked up on some plot threads from previous films as well. What happened to the Pterasaurs flying free at the end of the last film and how about that cannister of dino embryos that disappeared in the mud after Neary got smeared in the first film? I enjoyed Jurassic World for what it was, but it would have been better for me if there had been more tension and a more defined link to the previous films. What themes there were could also have been given more depth. Maybe next time... Terrorists in the Park? 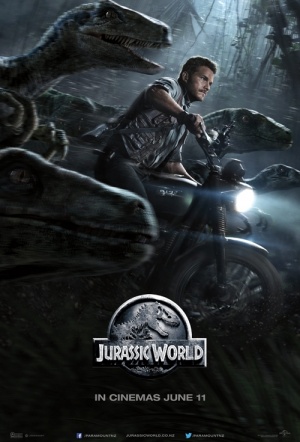