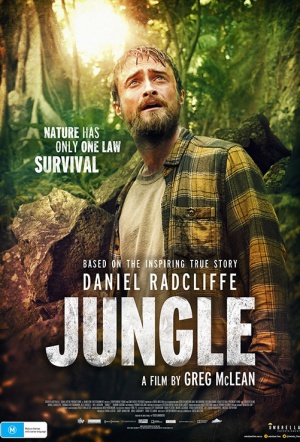 "In the early 1980s, 22-year-old Israeli backpacker Yossi Ghinsberg (Radcliffe) and two friends – Swiss teacher Marcus Stamm and American photographer Kevin Gale – set off from the Bolivian city of La Paz on what was supposed to be the adventure of a lifetime. Leading the way into the uncharted Amazon was Austrian expat Karl Ruprechter, who had met the friends just days before and claimed to be familiar with the region. But their dream trip soon turned into a wilderness nightmare from which not all of the men returned." (Melbourne International Film Festival)

McLean has picked an opportune moment to demonstrate his skills outside the bloodiest horror wheelhouse. Job done.

More time could have been spent developing the bond between the men, but ultimately this is quite gripping: a weepie bromance. You don't see one of those every day.

Despite Mr. Radcliffe's all-too-obvious dedication (his increasingly emaciated body, astonishingly, was not digitally enhanced), he can't rescue a screenplay (by Justin Monjo) that cares more about the condition of his flesh than the contents of his head.

Despite the considerable physicality of the movie, with its impressive cinematography and Radcliffe's believable, all-in disintegration, it's more earthbound slog than psychological deep-dive.

Chilling and harrowing, Jungle soars in strange and unexpected ways.

Radcliffe menaced by a hostile bush is far more entertaining as innuendo than actual drama. What might have been Deliverance in the tropics is rather a Dan versus wilderness yarn.