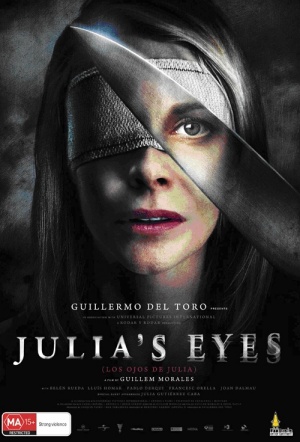 "When a young woman, suffering from a degenerative eye disease, discovers her sister hanged in the basement of her house everything points to suicide. Itched by other suspicions, Julia (Belén Rueda, The Orphanage) intuitively feels this is a murder case and embarks on a dark journey where the emanating light is literally fading to a flicker at the tunnel’s twisted end. As Julia begins to uncover the terrifying truth about her sister’s death, her sight deteriorates, blurred between a series of unexplained disappearances, deaths and her own struggle for survival." (Official Synopsis)

Stylish chiller that leads the viewer up a satisfying number of blind alleys.

Pulls off at least one must-see: a virtuoso sequence evoking Julia’s blindness, with nearly every shot locked onto Rueda’s face.

Edge-of-the-seat viewing from start to finish.

It's overlong but Del Toro acolyte Rueda brings some much atmosphere and suspense that you'll barely notice.