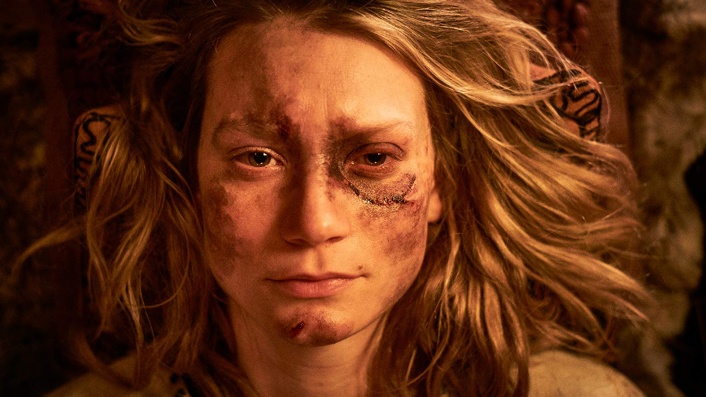 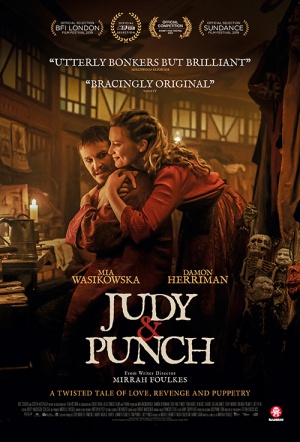 Mia Wasikowska (Alice in Wonderland) is one half of a puppeteering duo going through tough times in Australian actor Mirrah Foulkes's feature directorial debut. Nominated for the Grand Jury Prize at Sundance.

"In the rough-and-tumble town of Seaside (nowhere near the sea), villagers flock to Punch and Judy’s marionette theatre. Though Punch (Damon Herriman) proclaims himself the greatest puppeteer and his beating stick rouses cheers from the crowd, it’s Judy (Wasikowska) who breathes artistry into the otherwise crude show. But during a drinking bout and a tragic mishap with their child, the hot-tempered Punch brutally beats Judy, leaving her for dead in the woods. Taken in by Doctor Goodtime and a society of outcasts, Judy plots her revenge." (Sundance Film Festival)

As inspiration for decor and costumes, Foulkes and her crew looked at Dutch paintings of the period, but don't expect any Vermeer-like passages of luminosity or serenity to seep into the picture. The look is grimy, the tone is wacky and the pace is hectic.

A risky project for Foulkes to make as her first feature, Judy & Punch ventures a little too far into troubled waters with its comedic handling of heavy matter, but shows promise in the woman holding the strings.

There are memorable moments and promising directorial touches but, in another way, there is so much crammed in that it becomes a bit of a dog's breakfast.

The overall concept, from Foulkes and her trio of story collaborators, has a bracingly original air, from the film's period anachronisms to its impressive design elements.

This live action reinterpretation of the traditional puppet show is a grand guignol romp through a society gripped by a fever of superstitions.