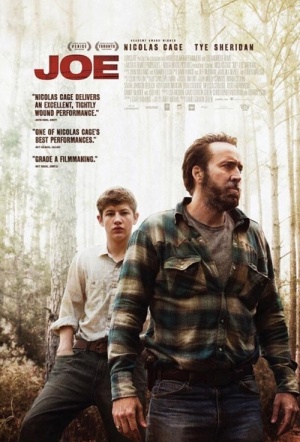 "Based on Larry Brown's acclaimed novel, the film tells the story of a kind-hearted excon (Cage), who oversees a group of Mississippi men who clear trees for a large lumber company. When Gary (Sheridan), a determined fifteen-year-old, shows up looking for work, Joe is hesitant to turn him away. After taking him on as part of the crew, Joe soon becomes a father figure. It's an easy role to fill, since Gary's own father is a brutal alcoholic. In a desperate attempt to escape his troubled household, Gary runs away from his family, looking to Joe for refuge. But Joe is no simple Samaritan. Recently released from prison, and with his own history of erratic acts, he makes for an unpredictable protector. And yet the two see something in each other, some core of dignity that might survive their ragged lives." (Toronto International Film Festival)

Green, as is his wont, too often strains for poetic effect through flowery voiceover and tone-deaf interactions.

Cage gives his most committed performance in years as this divided soul, but it still looks like acting when compared with Mr. Poulter's embodiment of pure evil.

Serves up a bloody cut of Southern Gothic and a bullish portrait of masculinity in crisis, perfectly embodied by Nicolas Cage.

Paradoxically brutal yet tender, populated by hard men who wear the scars of difficult lives inside and out.

Where it really works is in Cage's bone-deep characterization of a man at war with himself, as tightly leashed as the badass bulldog that guards his house.