Jimi: All Is By My Side 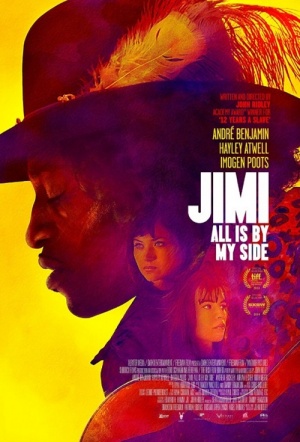 Hip hop artist and one half of the duo Outkast, André Benjamin is musical legend Jimi Hendrix in this biopic detailing the guitarist’s years before he hit ultimate fame. Written and directed by the award-winning screenwriter of 12 Years a Slave.

"A portrait of the icon as a young man... A sensitive, struggling guitarist on the verge of becoming a rock legend. In 1966, James Hendrix - stage name Jimmy James - is still an unknown backup guitarist playing in New York's Cheetah club. Hip, stylish Linda Keith (Imogen Poots) happens to catch a set he's playing and is mesmerised by his talent. She also happens to be girlfriend to the Rolling Stones' Keith Richards. Encouraging his talent, even buying him a new guitar, Linda brings Jimmy into her circle and, after failed attempts to get him signed, introduces him to Chas Chandler, bassist for The Animals and his future manager.

"Listening to the strides being made by mid-sixties British musicians, Jimmy is convinced that London is the gateway to success in America. But once there, he finds himself caught between Linda's protective grasp and the charms of a new admirer, Kathy Etchingham (Hayley Atwell). Their chemistry, if volatile, is immediately apparent. With Kathy by his side, Jimi, as he is now known, navigates London's music scene and begins to make his mark in the world of rock 'n' roll." (Toronto International Film Festival)

Jimi: All Is By My Side / Reviews

An unpredictable film, a difficult approximation of a biopic. But it delivers a Jimi Hendrix experience somehow the richer for sidelining the man and subverting his music.

Intimate take on a slice of Hendrix's life is more convincing than many full-blown biopics.

The film's limitations play to its advantage, since Ridley eschews the usual biopic approach, instead taking a snapshot of 12 crucial months in the musician's life, three years before his death.

Jimi: All Is By My Side / Trailers