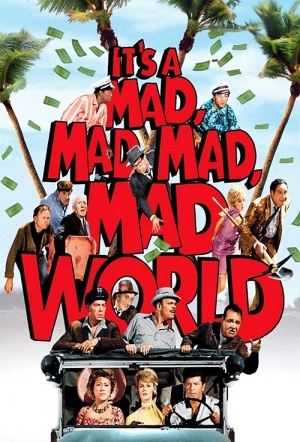 A group of strangers come across a man dying after a car crash who proceeds to tell them about the $350,000 he buried in California. What follows is the adventures of those strangers as each attempts to claim the prize for himself.

It's a Mad, Mad, Mad, Mad World was a critical and commercial success, winning a 1964 Academy Award (for Best Sound Editing) and being nominated for five others. It was re-released in 2014 by The Criterion Collection, who, in collaboration with Metro-Goldwyn-Mayer, United Artists and Robert A. Harris, restored much of the lost footage that was cut for its general release in 1963.

The comic competition is so keen that it is impossible to single out any one participant as outstanding.

Kramer's 'comedy to end all comedy' stretches its material to snapping point but offers happy hours of star-spotting.

So many excellent actors and stunt men do so much in this film that it is beyond my space allowance to begin to credit them.

The definitive wacky screwball comedy that spawned a genre.