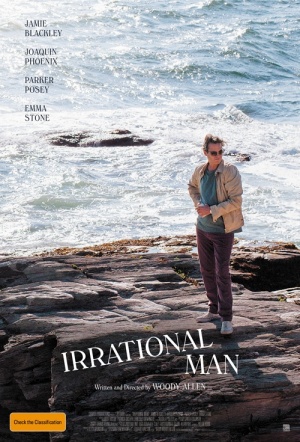 Joaquin Phoenix stars in Woody Allen’s dark comedy-drama as philosophy professor Abe Lucas, caught in the midst of a grim existential crisis. Emma Stone co-leads the film as a bright student who takes a fascination to Abe, resulting in a unique relationship will change their whole perspectives of life… not necessarily in a good way.

Abe has a healthy reputation as a professor of philosophy, but not exactly a healthy outlook on life. He’s been welcomed by a small town university with open arms and invited back to the bedroom by his former flame (Parker Posey), though this does not steer him away from his own dark thoughts – ones he constantly drowns with alcohol. But when his student provides him with a golden reason to live, albeit by accident, Abe suddenly finds a profound purpose. And that’s when things really start to go wrong.

Woody Allen takes a heap of existential woes and swirls them around like a single-malt in this black rom-com, using the mind of morbid philosophy professor Abe Lucas as the whiskey glass. It’s a mentality-exposing role that demands excellence, and where Blue Jasmine had the flawless Cate Blanchett, Irrational Man has the dynamic Joaquin Phoenix.

There’s something sloppy and sluggish about Irrational Man, even by Allen’s uneven standards.

Allen has worked wonders in the past with superficially similar moral tales, but this one’s a sketchy rehash.

It's a tongue-in-cheek mystery which is neither quite scary and serious enough to be suspenseful, nor witty or ironic enough to count as a comedy.

After the delightful, if frothy Magic in the Moonlight, Irrational Man feels like a step down for the prolific Woody Allen.

Allen has crafted a suspenseful mind-teaser that might feel too much like an intellectual exercise if Phoenix and Stone didn't infuse it with such raw humanity.

Can be seen as one of Allen's cleverest films, but even the satisfying tidiness of its ending contributes to the sense that we're watching a simulation rather than a story.