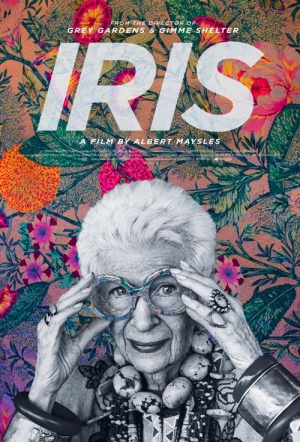 A documentary legend tackles a fashion icon here with Albert Maysles' (Grey Gardens) portrait of style maven Iris Apfel, the New Yorker now in her 90s and showing no signs of relinquishing her superb sense of style.

"The great documentarian Albert Maysles'... film is about fashion- and interior-design maven Iris Apfel, who is herself just south of 94, as she celebrates the late wave of popularity she enjoyed on the heels the Met’s 2006 exhibition of her collection of often affordably priced fashion accessories. Maysles, who pops up from time to time as a cheerful on-camera presence, follows Iris as she makes selections for the touring exhibition, advises young women on their fashion choices, and bargains with store owners, usually in the company of her husband of 66 years, Carl, who recently turned 100. Iris’s resilience is a wonder to behold, never more so than when she dismisses the idea of being "pretty" - for her, the only thing that matters is style." (New York Film Festival)

A joyous celebration of creativity and razor-sharp wit sustained into old age...

This woman has plenty of blunt wisdom to share.

It's an affectionate, slight, minor work.

Isn’t groundbreaking doc filmmaking, but it’s amiable and jovial in a way rarely seen in the field...

A woman who is less an eccentric than an ineffably sane, sensible commentator on her own colorful life and the world she inhabits.