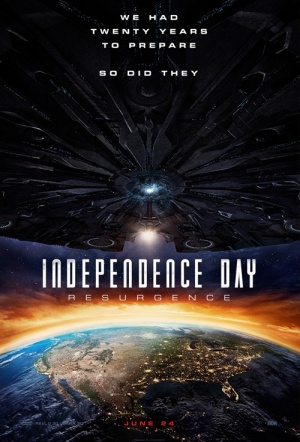 Roland Emmerich, director of the '90s sci-fi blockbuster original Independence Day, returns for another large-scale invasion. Takes place decades onward, where Earth has learned new tricks from the alien technology left behind after the first attack. Sequel sees the return of Jeff Goldblum and Bill Pullman, alongside Liam Hemsworth (The Hunger Games) and Maika Monroe (It Follows). Will Smith does not star, however - his character died in an accident.

Delivers swiftly and generously when it comes to the goods most viewers will have come for - the time-honored joys of blowing stuff up, in set pieces that escalate dizzyingly in size and context.

An insanely OTT sequel to the already-ludicrous-enough alien invasion smash.

The most planet-smashingly boring sci-fi sequel in history.

Hanging over it all is the question of why the film was worth making at all, except as a pure bid for profit.

Any further sequel (which this clearly hints at) would be ill advised.

The main thing consumers will be looking for from Resurgence is bang-for-buck entertainment, and that it delivers reasonably successfully.

As spectacular as you'd hope from a sequel to the 1996 planet-toaster, and as amusingly cheesy. You'll enjoy yourself enough that you won't even miss Will Smith.