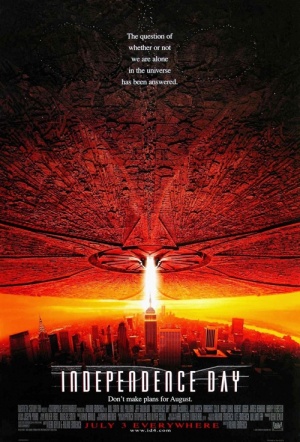 The 1996 sci-fi blockbuster, re-released in 3D, in which Will Smith, Jeff Goldblum, Bill Pulham and Randy Quaid attempt to save the world from a militant alien invasion. From director Roland Emmerich (2012).

When a fleet of alien spacecraft arrive in our planet's orbit some welcome them with earthly hospitality, but before long the visitors begin using hi-tech weaponry to obliterate cities and landmarks. The survivors, led by President Whitmore (Pullman), are re-grouping and plan a counter-attack that will take the efforts of a satellite technician (Goldblum), a Marine Corps pilot (Smith) and an alcoholic crop-duster (Quaid) if it can successfully repel the extra-terrestrial invaders.