In A Better World 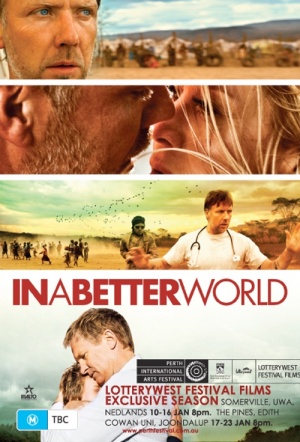 Winner of Best Foreign Language Film at the 2011 Academy Awards and Golden Globes. Danish drama from director Susanne Bier (After the Wedding, Brothers), following the lives of two Danish families, stretching from a refugee camp in Suden to a Danish provincial town.

In war-torn Sudan, physician Anton (Mikael Persbrandt) confronts a steady stream of tragedy and loss. Back home in Denmark, his estranged wife, Marianne (Trine Dyrholm), is concerned about their eldest son, Elias, who is picked on mercilessly. When new kid Christian arrives in class, he and Elias bond over a mutual hatred of the school bully. Surly and vicious since the loss of his mother, Christian is hardening into a rigid and ferocious manifestation of masculinity. His heartbroken father, Claus (Ulrich Thomsen), is finding it impossible to cope with Christian’s behaviour...

In A Better World / Reviews

Another richly layered examination of family dynamics and those ever-tricky lines of human communication, In a Better World represents a return to accomplished form for Danish filmmaker Susanne Bier.