How to Train Your Dragon 3D: The Hidden World 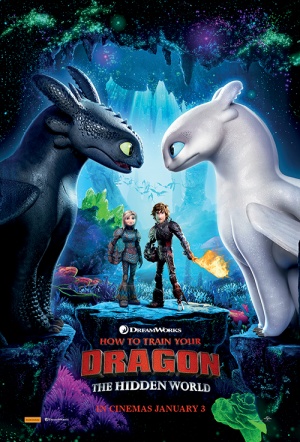 The arrival of a female Night Fury turns Hiccup (Jay Baruchel) and his dragon Toothless's lives upside in the third entry in the franchise based on Cressida Cowell's novels. Dean DeBlois - nominated for a directing Oscar for each of the previous two films - returns to write and direct.

Hiccup and Toothless will finally discover their true destinies: the village chief as ruler of Berk alongside Astrid, and the dragon as leader of his own kind. As both ascend, the darkest threat they’ve yet faced will test the bonds of their relationship like never before.

How to Train Your Dragon 3D: The Hidden World / Reviews

"How to Train Your Dragon: The Hidden World" packs the emotional heft of the dozen or so years it has taken to get this far, tracking the loss of one parent, the discovery of another, and several momentous lessons in bravery and loyalty along the way.

The visual soars but the franchise's emotional heartbeat struggles to make itself heard over the din of subplots and the annoying banter of Hiccup's teen tribemates.

The dialogue is more wise-cracking and knowing, geared to appeal to young teenage boys rather than children. The technical aspects are as good as ever: indeed, the technology advances with each film, so that each looks richer than the last.

Rivalled only by the Weta-infused Apes as the best trilogy of the current decade, How to Train Your Dragon completes its triptych with a fitting final flourish.

Eight years on, the How to Train Your Dragon films might not break any new aesthetic ground... but they remain as vibrant as ever.

All told, by the time How to Train Your Dragon: The Hidden World nears the end of its Harry Potter-esque closing trajectory, in which Hiccup must learn how to let go, the bittersweet result will have audiences finding it equally hard to say goodbye.

DreamWorks Animation's most heartfelt series bows out with a beautifully designed finale, but the long-awaited emotional goodbyes for its beloved central duo don't quite soar.

How to Train Your Dragon 3D: The Hidden World / Trailers