How to Train Your Dragon 2 3D 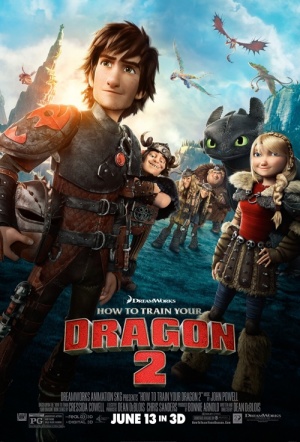 Hiccup and Toothless come across an ice cave that is home to hundreds of new wild dragons, looked after by a mysterious new dragon rider. However, the emergence of Drago – a feared conqueror looking to build a dragon army – could mean the end of the peaceful harmony between humans and dragons. The bond between Hiccup and Toothless is strong, but the crushing iron fist of Drago may prove too much for the pair.

A third film has been announced, set for release in 2016, also to be directed by Dean DeBlois.

How to Train Your Dragon 2 3D / Reviews

Advances the story without sacrificing the integrity that defined its most atypical toon.

More emotional, exhilarating and expansive than the original. DreamWorks finally has a franchise to match its ambition.

This is a more rugged affair than, say, "Frozen," and any admirers of that film might find themselves yearning for a few more songs and a little less testosterone.

The story seems to be going somewhere until it comes to a halt with the inevitable showdown between the forces of darkness and the forces of light.

The rote hero/villain face-offs are exciting, but the film is in no hurry to fast-forward to them.

Going beyond the pat eco-conscious message that every kids' film has to have, HTTYD2 touches on how complex the emotional bond between a person and an animal can be.

How to Train Your Dragon 2 3D / Trailers