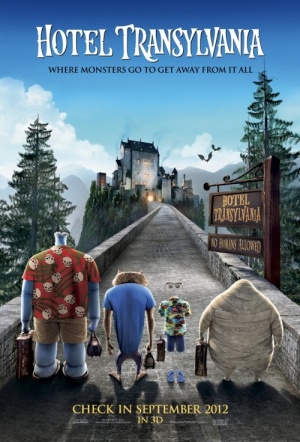 Adam Sandler is the voice of Dracula, owner of the finest 'five stake' monster resort outside of the human world in this animated family comedy. The hotel lets monsters and their families be themselves without the interference of pesky humans.

To celebrate his daughter Mavis' (Selena Gomez) 118th birthday, Dracula organises a monster bash at the resort. On the invite list: Frankenstein (Kevin James), the Mummy (Cee-Lo Green), the Invisible Man (David Spade). But when ordinary human fellow Jonathan (Andy Samberg) stumbles into the party and finds a soulmate in Mavis, Dracula won't let it stand.

A stale overprotective-dad story set within a location that could easily house a more inspired mix of characters and events.

So why does this animated kids' film fail to come together? Bursts of manic pacing steamroll over most of the wit, a little of Sandler's thick-accent shtick goes a looong way, and by the time the requisite life lessons about letting your offspring leave the nest get rolled out, the undead-on-arrival jokes are outnumbered by anemic sitcom gags.

For the first half of the film, amusing monster humor keeps things interesting; some monsters, it turns out, are better at party games than others.

Yet another instance of a decent, potentially thorny premise bogged down in a mess of treacly sentiment and tedious moralizing.

'Hotel Transylvania' checks in as an anemic example of pure concept over precious little content.

A story about the difficult balance between protecting loved ones and controlling them is discarded so the cast can monomaniacally pursue a trite cliché summed up with a silly noise.